Anatomy of a 1935 railroad timetable

The author Rex Stout, creator of the peerless private detective duo of Nero Wolfe and Archie Goodwin, wrote his masterpiece “The League of Frightened Men” in 1935.  In the tale his character Nero Wolfe, a denizen of Manhattan, admonishes a client that “You had better run, or you’ll miss your train.”  Stout then has Wolfe add this stern observation on the subject of possibly missing one’s train:

“It occurs to me that no publication either before or since the invention of printing, no theological treatise and no political or scientific creed, has ever been as narrowly dogmatic or as offensively arbitrary in its prejudices as a railway timetable.”

It’s no wonder that even the brilliant and successful Rex Stout harbored such a cold, unsympathetic feeling for railroad timetables in the first half of the twentieth century. The option for on-demand, inter-city mobility by private automobile didn’t yet widely exist. Everyone perforce traveled by train, and thus all rail passengers were in thrall to the services defined in timetables. Travelers marched inexorably to the beat of the timetable. Another character in the same Rex Stout novel alludes to this 1935 reality when he quips that an article should be written on the subject called “The Tyranny of the Wheel.”

The need for predictable, reliable railroad scheduling and safe, dependable operation, after all, was the impetus for the establishment of standard timekeeping and time zones across the country in the post-Civil War 19th century.  Too, the rhythm of departures was driven by the need to optimize the carrying capacity of the rail corridors on which trains moved; the station-by-station schedules published in timetables were the formal documentation of that carefully analyzed operational pulse.  Every public timetable was correlated to the internal company timetable over the same route.

The same capacity optimization need exists today in a mostly freight train era. Every railroad operates according to its TSP, or Transportation Service Plan, which is just as carefully planned to match the capacity of the rail networks with the timing of freight trains—and the occasional Amtrak train—on the corridors.

Thus, in the late 19th century and first half of the 20th century when passenger trains defined the way people moved, timetables were a necessity for efficient railroad operation in addition to being a convenient marketing and informational tool for the traveling public to know what trains went where and when.

Beginning right after World War I and through the Roaring Twenties and 1930s Depression Era, timetable covers were often printed in two or more colors, the better to attract the public’s attention by differentiating each rail company’s identity more sharply.  This trend included the establishment and marketing of distinctive railroad logos and slogans which became familiar to the traveling public, such as the Great Northern Railroad mountain goat, the Pennsylvania Railroad keystone, and the New York Central’s “Water Level Route.”

It was a marvelous time in American and rail history, and the public timetables documented that era for eternity equally as much as Egyptian pyramid hieroglyphs did that ancient period of human history.  I will explore and highlight some of the stories embedded in public railroad timetables in words and pictures through intermittent posts like this one to allenontravel.

I’ve chosen to start with a cursory look at the Great Northern system timetable for the summer of 1935 because it was in use contemporaneously with the publication in August of that year of the Rex Stout novel I quoted from above, “The League of Frightened Men.”  The term “system timetable” means the thick booklet lists every passenger train operated throughout the entire GN network, which in 1935 covered many routes and trains between the Pacific Northwest and Chicago (reached via close-tied Chicago, Burlington & Quincy Railroad).

The cover grabs one’s attention right away in its bold red and black, GN goat logo, and a reminder that Great Northern is the “Route of the EMPIRE BUILDER” which is “Completely Air-Conditioned” to guarantee hot weather comfort aboard.  At the bottom of the front page in drop-out white lettering against a black background is the simple statement “GLACIER NATIONAL PARK” to emphasize the spectacular natural beauty of the American West through which its trains passed.

Inside the fold a full page, two-color advertisement was devoted to describing the luxe and excitement of traveling on the Empire Builder, the GN’s premier train between Chicago, the Twin Cities, and the Pacific Northwest, taking note of piercing the Glacier Park, and including a God’s eye photo looking down on happy, well-dressed families with kids reveling in the comfort of the Builder’s “Luxury Coaches.” 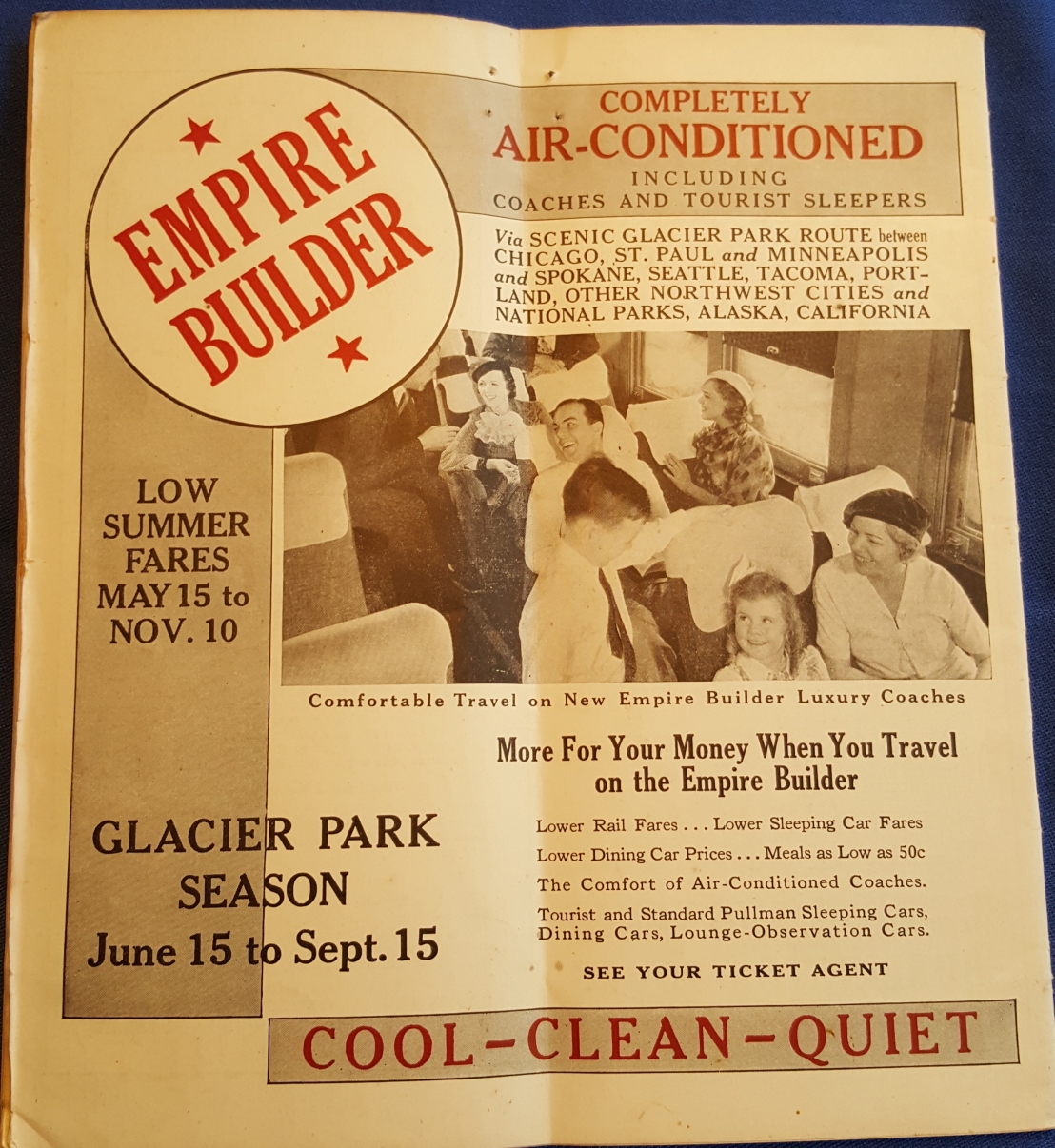 Note the careful itemization of decision points important to discriminating would-be summer, 1935 travelers: low rail (coach) and sleeping car (Pullman) fares—lower than before (it was the middle of the Depression, after all); lower dining car prices; the comfort of A/C (a luxury in the 1930s); the importance of a clean and quiet environment (read: no coal soot or cinders penetrating the sealed, air-conditioned cars); the many places reached (Glacier Park twice mentioned, along with several Pacific Northwest cities, Alaska, and California).   Clearly, Great Northern’s marketing and art departments were as fully engaged with timetable design and content as was the transportation (operating) department with basic schedules.

All this interesting data, and we haven’t even opened the timetable to the first inside page yet!

Rex Stout’s grievance against timetable tyranny was widely felt at the time and nothing new.  American humorist Will Rogers, who died on August 15, 1935, the day after Stout’s “The League of Frightened Men” was published, took a dig not at the rigidity of schedules, but at the inherent complexity of the timetables themselves, with this quote:

“There are two things I don’t care how smart you are, you will never understand. One is a psychiatrist’s court testimony, and the other is a railroad timetable.”

From time to time allenontravel will unravel the mysteries and wonders of public rail timetables up to about 1970, covering elements such as:

Indeed, so much and so varied information packed into a single system timetable leaves no doubt that Will Rogers and Rex Stout were accurately describing the general public sentiment of the time.  If all you wanted to know was what trains went from A to B, then timetables could be daunting.

But not to us, as we will see in my occasional posts on the subject of railroad timetables.