I was in Denver this past week for the annual Rail-Volution transit and land use conference, my fourth at this extremely valuable get-together of public transit planners and operators, urban land use specialists, and public mobility policy experts.  Preparing for my trip, naturally I made plans to get between the remote Denver airport and downtown using public transit.  In the past I have rented a car or used taxi and shared ride services for the same trip.

Halleluiah! I thought, as I planned.  No more expensive tollways in a rental car. That is, if the train actually worked.

It did.  I was delighted with my public transit train experience both arriving and departing.  In fact, I was astonished at how quick, convenient, and cheap it was to use the new train that connects DEN Airport to the city of Denver.

DIA, as it’s known to locals—DEN to you and me—was first studied in 1980-83, and the site 25 miles east-northeast of downtown Denver was initially funded in 1989.  After huge budget overruns—at $4.8 billion, almost two billion more than forecast—the gigantic new field opened twenty-two years ago (in early 1995) to replace venerable Stapleton Airport. This followed the debacle of its rogue luggage handling system, which famously chewed up some bags and sent others flying through the air.

You’d think that spending nearly $5 billion and having the foresight to acquire enough land for 100 years of airport growth would have included a public transit link to get the long 25 miles into central Denver.  But no, nothing.

Finally, though, 21 years after opening, the airport has a commuter train operating to Denver Union Station.  Service began in April, 2016. Better late than never.

The University of Colorado A-Line train (naming rights were sold to UofC for five years at $1,000,000 per year) is operated by RTD (Regional Transportation District), the huge transit agency that handles all Denver-area public transportation.  The “A” in A-Line refers proudly to service to the airport.  In this political era of desert-like public infrastructure spending austerity, the project needed a layer-cake approach of P3 (Public-Private Partnership) funding to agglomerate the $2.3 billion total cost (or thereabouts—cost reports vary), which at $96 million per mile actually isn’t bad these days.

The trains make the 24-mile journey between DIA and DUS (newly refurbished Denver Union Station in the heart of downtown) in 37 minutes at a reasonable fare of $9.00 (half that for seniors) departing in both directions every 15 minutes.  Convenient and cheap.  But reliable, safe, comfortable, doable?  The answer to all, with one or two minor glitches, is a resounding “yes.”

Here is my experience in minute detail from real-time notes I took.  Rereading this, I find it remarkable:

Checked out of  Sheraton (the Rail-Volution conference hotel) at 0534

Arrived 16th St. Mallride stop at Court St across from the Sheraton at 0537

EXACTLY 58 MINS FROM HOTEL TO AIRPORT

Lingered on platform for 5 mins to take pictures

Can’t beat that time and money bargain in 2017 in Denver.  My notes re the transit trip: 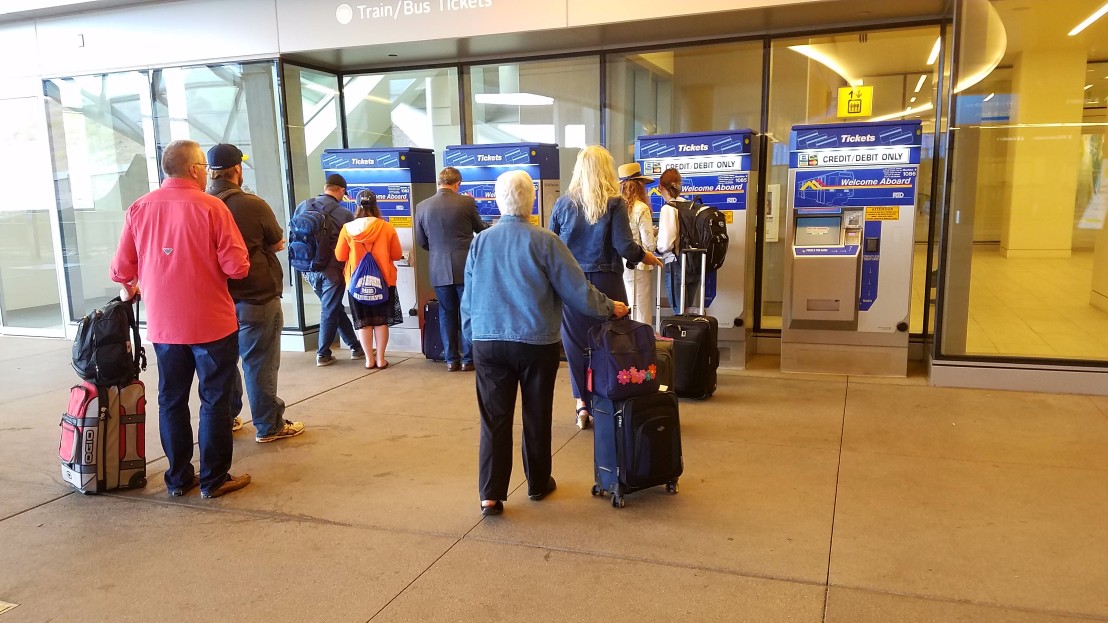 Okay, so the A-Line train service may be challenging in small ways.  Still, I give RTD credit for launching and executing a long-overdue connection from the airport to the heart of downtown Denver.  It has some teething problems (I haven’t even mentioned the fact that every at-grade rail-highway crossing has 24/7 flaggers due to persistent software glitches), but the trains ran on time for me, and I am confident such minor systemic issues will be worked out.

Meantime, as I said above: Halleluiah! If you are headed anywhere in the Denver metro area connected to the big RTD transit network of light rail, commuter rail, bus rapid transit, and regular bus services, cancel your Hertz or Avis reservation, and take the A-Line train instead.