APRIL 18, 2018 — Delta is slowly introducing its version of international premium economy, which it calls Premium Select, on A350 flights as those new aircraft come into service. Over spring break I flew with my wife and daughter on DL189/188 between Detroit and Beijing in Premium Select as part of our itinerary to Kunming (KMG), Yunnan Province, China.

As an admirer of Cathay Pacific’s comfortable and roomy premium economy cabin and seats, I was anxious to compare Cathay’s PE to Delta’s.  Also to compare to premium economy on Air New Zealand. (For a look at ten airline PE offerings, watch this video.)

Bottom line: Delta’s PE product is just okay.  Better than flying economy for sure, but nothing to write home to mama about.  Here below are my real-time raw notes of the Delta experience without editing.

Boarding “champagne” or water or juice offered in plastic glasses. Wasn’t nauseating, but certainly not anything I’d serve at home.

Aboard the A359 for the nearly 13-hour flight – Delta’s new PE seats were cushy and comfortable throughout, but too high under the knees.  Required a lot of moving around to avoid aching legs.

PE seats have 3 positions of movement: recline, leg rest, and foot rest. Bracket for foot rest as usual too short even for me (I am short), but overall seat was comfortable on the bottom and back the entire flight.

Hard-to-reach controls are typical of premium economy seats that are trying to differentiate from economy and mimic business class, but still lack enough width to pull it off.

We had bulkhead seats on the right side with plenty of legroom but slightly narrower seats. Convenient to get up to lav but noisy for the same reason.

Aircraft was too cold entire flight and blanket was too thin. I had to put my shoes back on to keep my feet warm. Pillow okay. Also had to wear a jacket entire flight to stay warm.

Overheads very large and roomy like in biz class.

Meals were typically mediocre, yet FA told me we got the same food as in biz class. Ditto for wines: drinkable, but forgettable. One was a decent Gigondas (Rhone Valley). Splits of sparkling wine were a bad Prosecco; I drank two anyway.

Headphones same as in biz class were claimed noise cancelling but were not. They were, however, comfortable with decent fidelity. I used my Bose instead, which were more comfortable and blocked out every extraneous sound and had far superior sound fidelity.

Movie selection of nearly 100 was so-so. Only first-runs were Shape of Water and Three Billboards. I had a hard time finding anything i wanted to see. Screens plenty big, but not close enough in bulkhead row.

Overhead reading light didn’t shine where I needed it to in order to read.

Very nice crew, all Detroit-based and originally Northwest. They hate the A350 because it is cramped and hard to work. Certainly it’s a bad interior design, with no aisle crossovers between biz class and rear galley.  Claustrophobic. But the crew, God bless them, tolerated people standing in the rear galley for long periods to stretch because of the poor interior design and length of flight.  Otherwise, we’d all have gone bat-s***t crazy.

Tray table was adequate. Amenity kit was cheap and Spartan but adequate for our family. Small menus handed out in PE were a nice touch, but suggested better quality food than was delivered.

Biz class in front of me is 9 rows of cubes. Looked like an office cube farm. Weird. Never get row 9, as it juts out adjacent to galley separating biz and PE and is thus very loud and never dark.

Oh, boy! Perfunctory service from a Detroit-based crew barely hitting the bases. Nothing like the really tight and friendly crew going over. Forgot my order three times and didn’t seem to care. Just counting time. I had to go remind them to give me a boarding “champagne” (warm Prosecco) after they forgot it the third time.  Same thing happened during each meal and snack service from Beijing to Detroit.  Good lesson in how a good crew (DL189 Detroit to Beijing) can make one’s flying experience shine even if everything else doesn’t.  I was glad to put that lackadaisical PEK/DTW crew behind us.

Service protocol sucked to begin with. Terrible food throughout. Mediocre wines. Supposed to be same as Delta One. God help them.

Ditto with headphones. Middling fidelity compared to my Bose and zero noise reduction, despite claims to the contrary. Also uncomfortable to wear for long periods. Losers all round. Supposed to be the same as in biz class.  If so, sad! 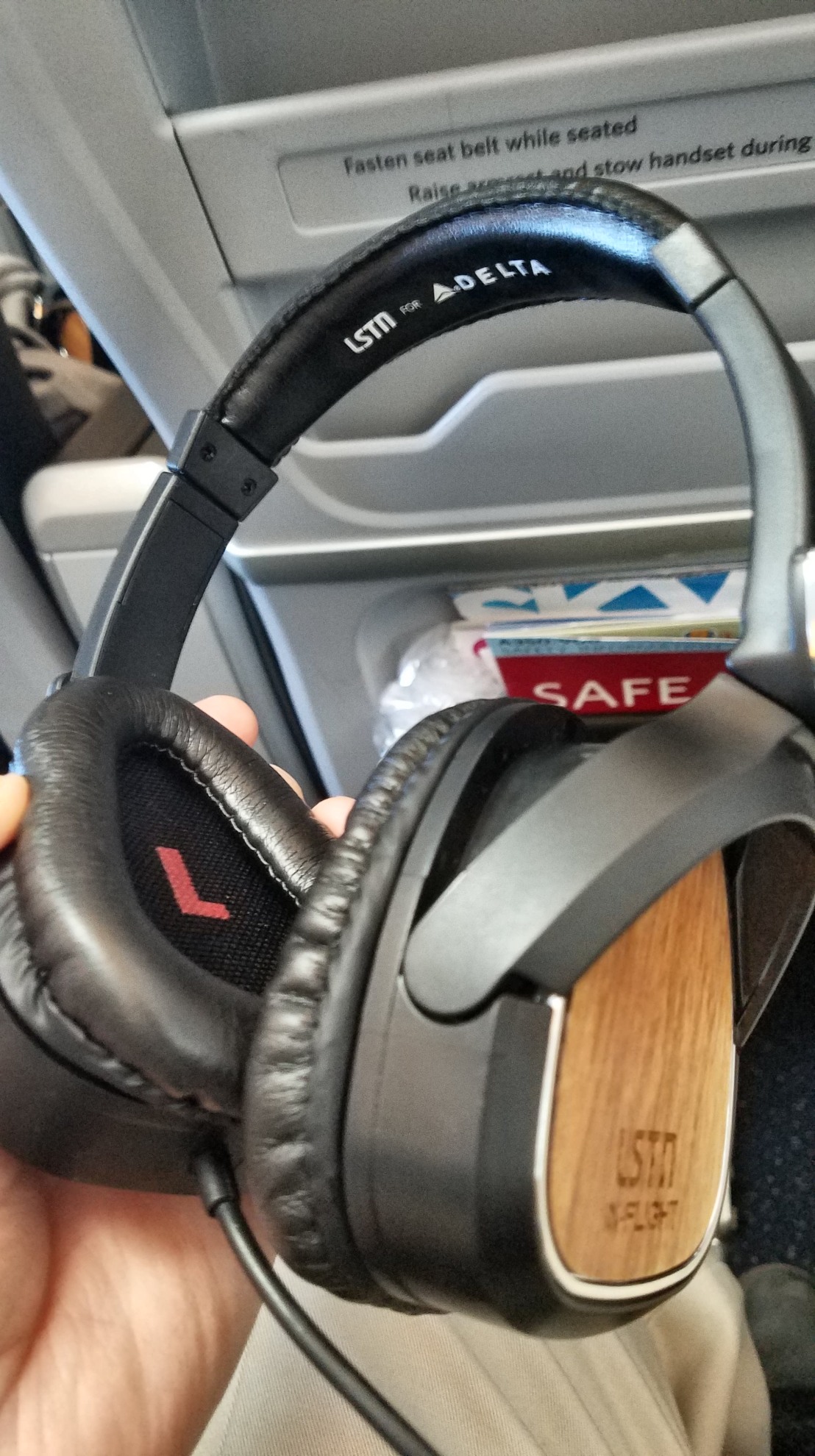 Seats really engineered poorly. Uncomfortable under the knees. Leg rests don’t come up much and not comfortable or very functional. Seat rows vary in spacing. Some too close together. 2-4-2 configuration confining and claustrophobic. Unlike the trip over, half the PE seats were empty, so I tried several, hoping to find comfort.  No deal.

Okay (but not great) movie selection and good cabin lighting ambiance, but A359 cabin temp was frigid both directions, forcing to me use 2 blankets, wear my jacket, and put my shoes back on. I was still too cold.

Seats have 3 button adjustment, recline, foot rest out, foot stool thingies. Easy to hit the buttons by accident with legs because the seat is so narrow.  Easy to forget this is premium economy, especially since, unlike the trip over, we were in PE seat rows near to the back of the Premium Select cabin.

Several maintenance issues on this almost brand new aircraft – couldn’t get sound to work on my screen even after FA rebooted it.  Had to move to an empty seat with sound that worked.  Good thing the plane was not full in PE. But then the overhead light didn’t work for reading, so I had to move to my original seat when I wanted to read.

Also moved to the very back row of Premium Select for an hour or so out of curiosity.  Noticed in the three rows that I moved back and forth between during the long flight that the seat spacing front to back (pitch) varies by several inches between certain rows.  Weird.

Was directed to forward lav in Delta One because of the inability to get to a PE or regular economy lavatory on the A359 (poor interior design). Saw and inspected those Delta One biz class cubes: ugly, claustrophobic, and look uncomfortable. Not my problem since we didn’t pay $6900 each, just $1500.

For RDU to Kunming (12 time zones), paying $1500 was okay, but the only leg with premium economy was Detroit to Beijing and back.  RDU to DTW was in Delta’s domestic Comfort+, and the Beijing-Kunming-Beijing flights were on Delta partner China Eastern.  Despite our ticket fare class in premium economy, China Eastern has no PE (yet), and thus we sat way back in coach on the 3.5 hour flights between PEK and KMG.

Final thoughts: The experience in both directions felt half-hearted, like Delta is just mimicking what other airlines are doing because it has to, not because it wants to win any awards for premium economy.  The seats are well-cushioned, but not ergonomically well-designed for all-round comfort, and the service was unexceptional.  I’ll probably use it again because it is better than coach, but I will set my expectations low next time.