Hurricane Florence intensified to a Category 4 bruiser today (Monday, September 10) packing sustained winds of 140 MPH.  Even though it is still more than a thousand miles off the coast of North Carolina, panic and frenzied excitement have set in here in Raleigh as the NWS incessantly beats the drum that we are the bulls-eye.  Here was the projected track as of 5:00 PM ET today:

The storm isn’t forecast to come ashore until this weekend, yet this was the scene at the big Harris-Teeter Grocery Store in Raleigh’s Cameron Village Shopping Center late this afternoon: 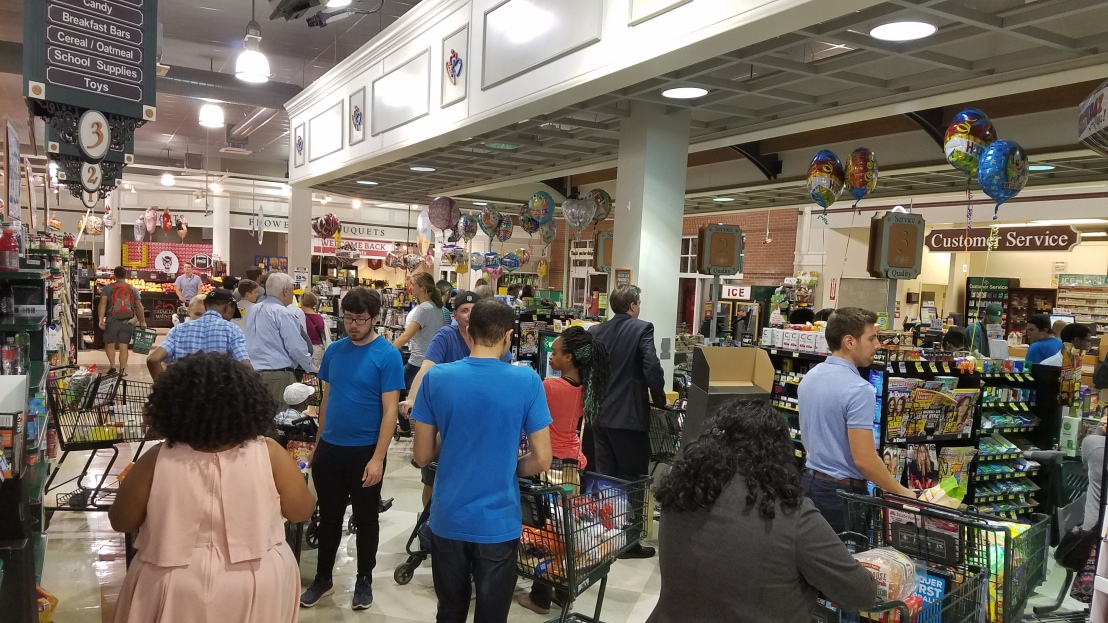 Many shelves bare or nearly so.

No bread or peanut butter or bananas.

Gridlock and bedlam in the parking lot.

Interminable lines behind all the registers, and all lines open.

And it’s only Monday!  Five days away from landfall.

But the mood in the grocery store queues was cheerful as opposed to grim, and behavior courteous.  Lots of smiles.

I am in hurricane anticipation and preparation mode.  And reflection of hurricanes past.

Growing up in eastern North Carolina (born 1948), I have lived through more hurricanes than I can count, including Category 4 Hazel in October, 1954.

I was six years old when Hurricane Hazel came directly over our house in Kinston, NC. I was immensely curious and watched excitedly out the windows as the winds bent over the forest of TV aerials on the neighboring rooftops.

Then the eye arrived: A weird calm and dim sunlight pierced the haze. When the eye-wall moved over us a little later, the skies turned black again, and the winds howled in the opposite direction.  I gaped as all the TV antennas bent back up straight again and then down the other way.  Some snapped off and were swept away.

Hurricanes are notoriously finicky, often defying the best data analysis that the science of meteorology can muster. Chances are, therefore, that Hurricane Florence will wobble away from us, so I am not yet concerned.  If it is still aimed at us on Thursday, then I will get serious about it.  Just the same, I was glad to get the last two loaves of Pepperidge Farm whole wheat bread this afternoon in the supermarket madhouse.

My wife and I moved into Raleigh’s Cameron Village neighborhood three weeks before Hurricane Fran hit in 1996, so we have a pretty good idea what to expect. Fran brought lots of rain in a short time, which was more problematic than the wind (occasionally 100 MPH).  Our house is at the top of the hill, so most of the deluge in 1996 ran off quickly.  As a result, we did not lose any major trees.

However, the Cameron Park neighborhood and the rest of Cameron Village lost a lot of oaks and other big trees when the soil liquefied just as the biggest wind gusts hit.  That happened especially at and near the bottom of hills where water accumulated and couldn’t drain off through the storm sewers fast enough.  In some cases, that also caused serious flooding.

The biggest problem for most people was loss of electricity.  Our power was out for 10 days after Fran, and we lost most everything in the fridge and freezer.  I bought a lot of ice the night before it hit and filled up our camp coolers.  So we had milk, eggs, cheese, etc. for three days before all the ice melted.  By then I was able to range around Raleigh and find isolated places selling bags of ice to replace it.  That helped.

Here’s my advice for surviving the hurricane (if it comes):

Obviously, it isn’t wise to stock up on frozen or cooled foodstuff when a hurricane is bearing down.  I saw idiots at Harris-Teeter the night Fran hit with shopping carts full of frozen meat.  I knew the lights would soon be out, and sure enough, we lost power just after midnight.  So much for their frozen chickens.

A really important tip is to park vehicles in a shopping center or school lot in the open (not under any trees) to avoid getting damaged or crushed by falling limbs and trees. Also because many cars become trapped in neighborhoods after the storm due to fallen trees on the streets.

Another reason to move cars to high ground (as well as open ground) is to avoid flooding.

Of course make sure cars are full of gas well in advance before the inevitable run on service stations.

Stock up with plenty of batteries, flashlights, and candles.  Get a battery-powered radio.

Despite being without power, we did not lose gas or water during or after Hurricane Fran (we have gas heat, hot water, stove, and range), so we could continue to take showers in comfort.

Make sure your cell phone batteries are well-charged.  Cell service is sometimes restored ahead of the power grid.

Look around the yard and secure anything light enough to become airborne in high winds.  That includes things like wheel barrows.  Lock away or tie down everything loose.

Our experience was that the best in people comes out after a storm like this.  Neighbors will help each other in times of need.

Let us see what the rest of the week brings.  Chances are good that the track of Florence will wander away from Raleigh.