As airlines do away with seat-back entertainment, what’s a body to do?

I plan to do what I have always done:  Take my own entertainment.

That has always included good old low-tech books.  No battery or headphones required.

When I began flying routinely in the 1970s, the acronym “IFE” for in-flight entertainment systems like seat-back screens with infinitely deep content didn’t exist.  Nor did laptop computers or tablets.  No cell phones, either, much less smartphones.  Heck, Al Gore hadn’t yet invented the Internet in the 1970s.

Airlines then offered—on some big airplanes on overseas flights and long domestic legs—drop-down screens in each cabin on which were projected one movie per flight. Prior to the movie, passengers were handed (or sold) cheap rubbery air-tube earplugs that resembled the sort of child’s toy stethoscope that used to come with a kiddie doctor bag at Christmas.

Actually, the toy stethoscopes probably functioned better.  I remember straining to hear movie dialog through those crap tubes.  At best it sounded muddy and weak, like the signal when trying to tune in a distant AM station (if you remember AM radio).

When the on-board VHS projectors worked at all (malfunctions were common), the movies shown were often dim and washed out and therefore nearly impossible to see because of cabin lighting and open window shades. The endless distractions of cabin service and people going to the lavatories didn’t help, either.  I often thought that airlines loved marketing on-board movies to attract customers, but didn’t care enough to make the execution live up to the hype.

Even when everything mechanical worked, the picture was a take-it-or-leave-it selection made by the airline, usually a bland, third-rate family movie meant to be as inoffensive as possible to most people.  On one flight I recall seeing some inane flick about parent hi-jinks with perfectly-coiffed and always-pretty children and wondering who would pay to see such something so unfunny at a theater.  I don’t remember the name.

And God forbid the movie had a curse word or two.  Those were always bleeped, and critical scenes of even mild violence were deleted (often leaving viewers to wonder what was happening).

Point is, we were left to our own devices of entertainment and distraction in those decades, and it looks like we may be coming full circle now.

Back then I always carried books to read and business papers to work on.  If I was desperately bored, airlines routinely stocked both cabins with lots of magazines, usually up to date.  Printed timetables, at the time an on-board staple (and now collectibles), were interesting to study, too.

Through five decades of flying I never stopped carrying novels to read.  My personal preferences are crime and political thrillers.  Current favorite authors include:

I have never read any work by any of those authors that disappointed.  And some, like Nesbø and Galbraith (Rowling), are dense, very long reads—perfect for Atlanta to Johannesburg (16 hours) or even Newark to Singapore (19 hours).

(I tried reading non-fiction on planes for years and finally gave up.)

Not that I look down my nose at technology.  I love jazz and often carry these greats to listen to on some device in my luggage:

And when technology hums the way we all want it to, of course I subscribe and binge on the latest from Netflix and Amazon Prime Video. Among my current favorite series are “Ozark,” “The Marvelous Mrs. Maisel,” “The Man in the High Castle,” and the droll “Patriot.”  I also like the new “Get Shorty” series (I am a big fan of the movie), and I like several Norwegian and Finish crime and political thrillers available on those streaming services.  I download and carry series and films to watch on board.

All that said, I hope the tendency to rip out IFEs will not apply to long-haul international flights quite yet. I like to drift off to sleep watching movies on extra-long flights (12-19 hours) using my Bose over-the-ear, noise-canceling headphones.  I rewind to watch what I missed when I awake.

If the airlines do remove every IFE, I just hope we don’t all look like this guy, who is seen using something called a “Laptop Compubody Sock”: 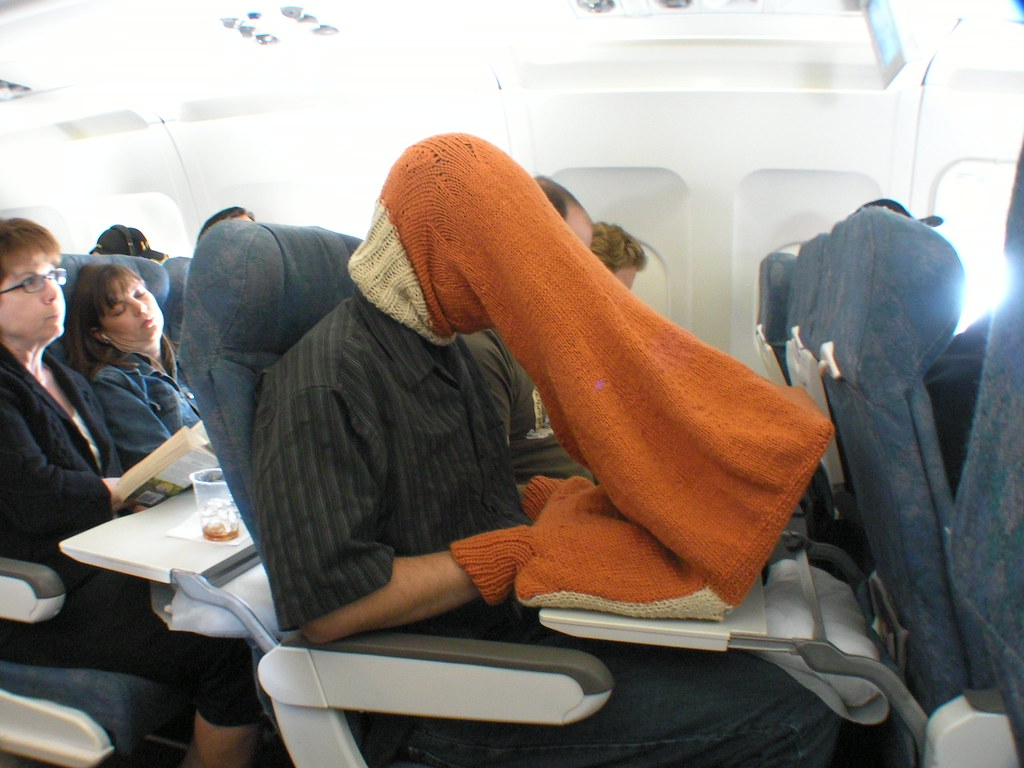 However, no matter what options the airlines provide or don’t offer for entertainment on board, nothing quite satisfies me like reading good fiction in the form of an old-fashioned, hard-copy book.  So, when I board and settle into my seat, I am all set, just like I always was.

That is, unless they do away with overhead reading lights on planes as well.